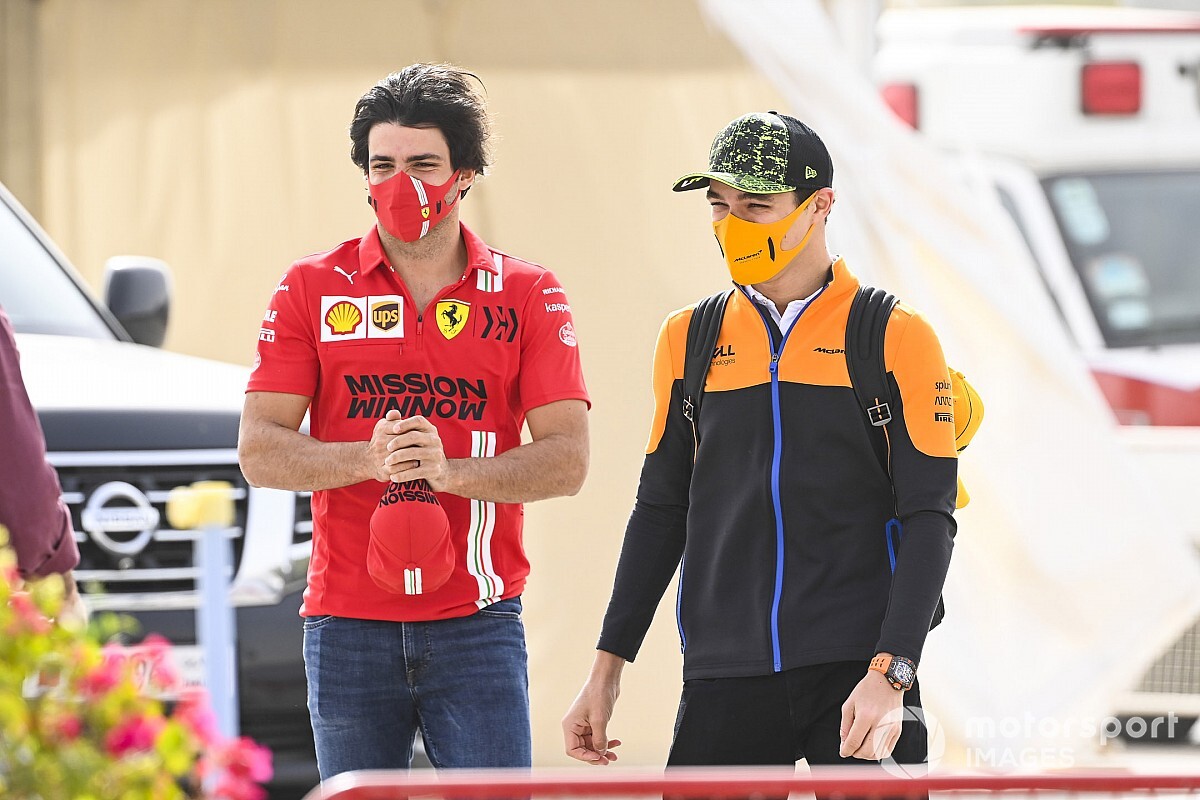 Ahead of the Monaco Grand Prix Norris texted Sainz saying the Spaniard had a good chance to win the race, based on Ferrari’s excellent low-speed corner performance.

Ferrari did perform strongly in the principality, with Charles Leclerc scoring pole and Sainz taking second, his first podium for the Scuderia.

McLaren managed to mitigate the points loss to its competitor for third in the constructors’ championship with a third place for Norris.

The fight now heads to the streets of Baku, which Sainz expects will be a strong circuit for Mercedes-powered McLaren because of its long straights.

“I said before going into [last race] weekend, Monaco would be a good reference for me to know how confident I am in the new car, the new team and to be honest I was feeling really at home since FP1, so I’ve been faster,” said Sainz.

“Going into Baku I think that we’re not going to be the best on that long straight but at the same time if we can make the time back on the on the tight part then then we should be okay.

“I think the one who now should be excited about Baku is my friend Lando Norris here on the left, because he has a rocket on the straight and the car’s definitely not bad. It was not bad last year in Monza, not bad in Monaco. So maybe I will bet on you.

“You know, he put pressure [on me] before going into [the Monaco] weekend saying that I might have a chance to win. You were right course, now let’s see if I’m right about Baku.”

When asked about Sainz’ comments, Norris said McLaren had tanked some confidence in Monaco after struggling in Barcelona, but he didn’t want to head to Baku with too many expectations.

“We’ll see, these guys are quick in the straights. You need good straightline speed, you need good confidence on the brakes with that kind of low downforce.

“In Barcelona we struggled a lot and I think a bit of that is why we were thinking we were not going to be competitive [in Monaco].

“But it changes, we’re still learning the car even though it’s pretty similar to last year, there’s some changes and they’ve definitely affected the car.

“So, we’re better in places, we’re maybe slightly worse in places, but considering we were thinking we’re not going to be good we came out pretty good, I think.

“I don’t think it’s good to set too many expectations,” Norris concluded, before joking: “I’ll be ahead of Carlos.”

Oliveira had to “manage emotions” throughout Portimao MotoGP