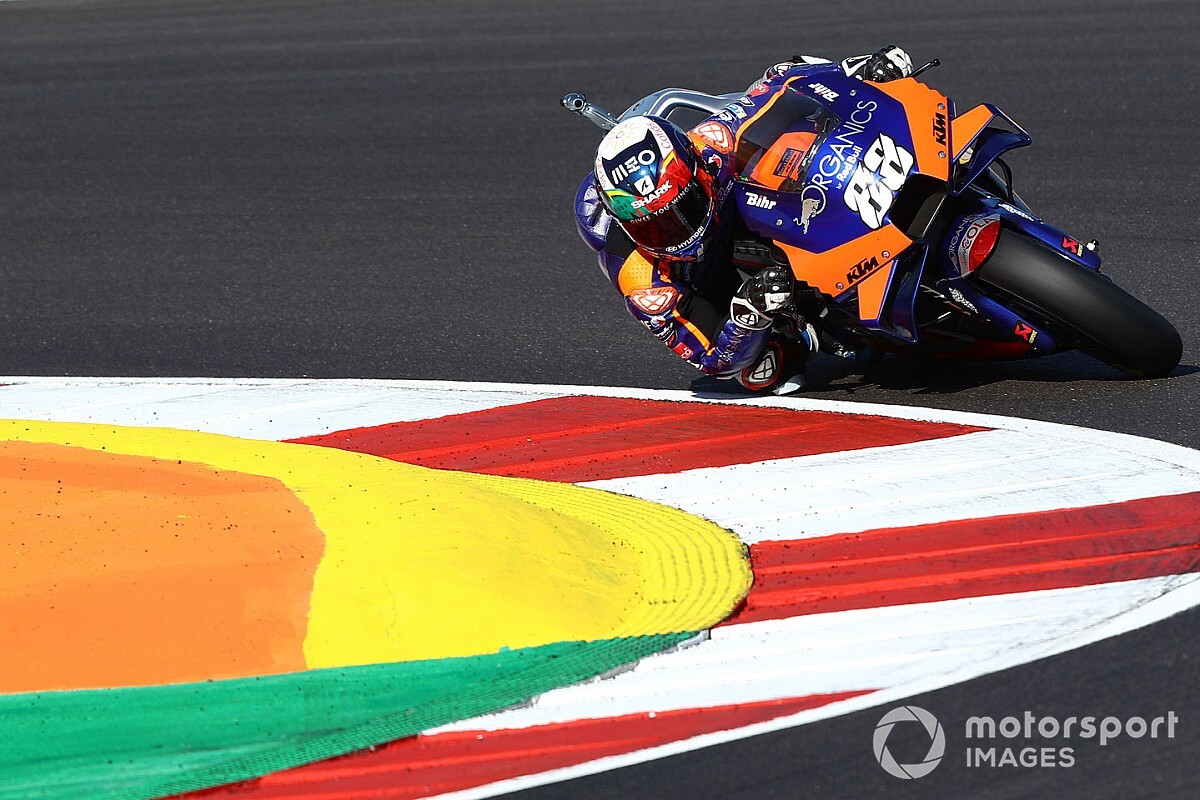 Tech3 rider Oliveira never led a lap in MotoGP until dominating all 25 at the Algarve Circuit on Sunday to sign off his career with the French outfit with his second victory ahead of his factory KTM debut in 2021.

A podium for Pramac’s Jack Miller secured Ducati its first constructors’ championship since 2007, capitalising on a miserable day for Suzuki.

Oliveira grabbed the holeshot from pole position ahead of Franco Morbidelli and Jack Miller, while world champion Mir was involved in a collision with Francesco Bagnaia.

The contact seemingly dislocated the Pramac rider’s shoulder, while Mir would have yet more contact on lap two when he clipped the rear of Johann Zarco’s Avintia Ducati – dropping him from 12th back down to his starting spot of 20th.

At the front, Oliveira seized control of the race and was already 1.5 seconds clear of the chasing Morbidelli at the end of the second tour.

And Oliveira’s pace continued to be blistering, his advantage opening up to well over four seconds by the closing stages.

Oliveira wouldn’t put a foot wrong and eased to the chequered flag to secure a famous home victory on MotoGP’s first visit to Portugal since 2012.

Morbidelli held Miller at bay for almost the entirety of the race, but the Pramac rider found a way through at Turn 13 on the final lap to steal second on his swansong with the satellite Ducati squad.

Despite the late robbery, Morbidelli still wrapped up runner-up spot in the championship on his 2019-spec Petronas SRT Yamaha.

Pol Espargaro ended his KTM career in fourth, which vaulted him to fifth in the riders’ championship, with LCR’s Takaaki Nakagami the top Honda runner at the chequered flag in sixth.

Andrea Dovizioso recovered from 12th on the grid to end his final Ducati appearance in sixth, with Honda’s Stefan Bradl heading Aleix Espargaro on the Aprilia and the sister works Honda of Alex Marquez.

Johann Zarco completed the top 10 following his early contact with Mir, with Maverick Vinales the top 2020 Yamaha rider in 11th on a woeful day for the Japanese marque outside of Morbidelli’s podium.

Valentino Rossi signed off his factory Yamaha career in 12th, heading Cal Crutchlow as he bids farewell to MotoGP as a full-time racer on his LCR Honda.

The Briton did hold fourth in the opening stages, but faded to 13th in the end ahead of a struggling Fabio Quartararo on the SRT 2020 M1 and Suzuki’s Alex Rins.

Quartararo’s disaster day means he slips to eighth in the final championship standings, with Rins completing the top three.

Danilo Petrucci missed the points on his final Ducati outing, as did Tech3 stand-in Mika Kallio and Avintia’s Tito Rabat on his final MotoGP appearance.

Mir’s race ended on lap 16 with a mechanical issue, with Brad Binder securing rookie of the year honours on his KTM despite an early crash.